Internet of Things (IoT) is a technology which is extremely interesting for the application in the future from different perspectives as it offers potential income to the suppliers of solutions and equipment, service providers, as well as brings new possibilities to the end users, whether it regards health care, industry, agriculture, smart cities or numerous other sectors. The first IoT Forum organized by Bug gathered leading Croatian actors in this area. 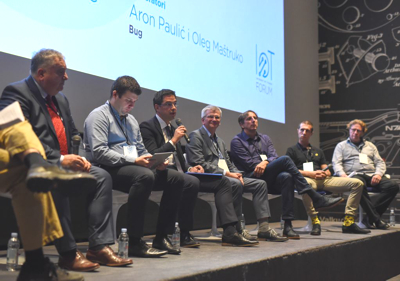 Following general plenary sessions related to the present and the future of Internet of Things, Mario Ravić, Manager IoT & Digital Health at Ericsson Nikola Tesla, presented the importance of IoT on the road to 5G. He pointed out the fact that standards and the ecosystem are key to the rise of Internet of Things, which is something Ericsson works intensively on. He also presented concrete examples of Ericsson’s projects in which a very important role is played by experts from our company. For example, Ericsson’s Connected Urban Transport solution was implemented in Dallas, and majority of the team are Ericsson Nikola Tesla’s employees. As another example he mentioned the system of intelligent assistance in caring for the elderly, Smart Habits, which has attracted a lot of interest from the industry and the public and has originated in the innovation incubator at our company.

An interesting panel discussion under the title “Will everything become connected to the Internet?” took place among participants who play different roles in the IoT ecosystem. It offered various perspectives on this area which is becoming more interesting every day; combined with 5G, it brings enormous potential income, which is projected to amount to several hundred billion dollars in 2026. Miroslav Kantolić, member of the Executive management at Ericsson Nikola Tesla, presented Ericsson’s long-time vision of a billion networked devices bringing benefits to the society as a whole, which is becoming more real every day. He emphasized the advantages of a standardized NB-IoT technology, which is being implemented by Ericsson and has already gathered a great number of companies in the ecosystem in a licensed spectrum. Moreover, he sees much greater possibilities in this segment for Croatian companies than those offered by Croatian market as, for example, experts from Ericsson Nikola Tesla work on a global market and achieve extraordinary results across the world in this area as well. During the panel discussion, an excellent example of collaboration between the economic and industrial sector was highlighted – Ericsson Nikola Tesla Summer Camp, where college students work on very interesting projects related, among other things, to Internet of Things.