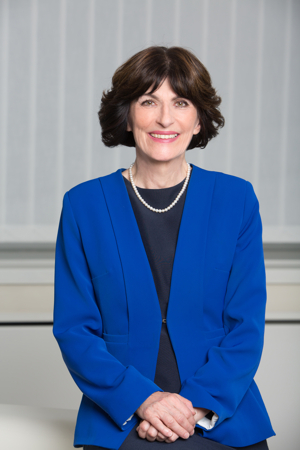 She graduated and obtained her Master of Science degree from the Faculty of Electrical Engineering & Computing at the University of Zagreb. Gordana Kovačević began her career by joining the then factory “Nikola Tesla”, and as a respected professional, and later a manager, she led Nikola Tesla’s most complex telecommunications projects for the local and international markets, as well as the largest line organizations in the company.

During her career, Gordana Kovačević has been engaged in strategic management, restructuring of the company and business development. On this journey, her innovativeness and an original approach were a part of her personal contribution to the local and global organization, which was recognized through Ericsson Centers of Excellence, which were her idea, and were first implemented in Croatia and afterwards in the entire corporation. She completed an executive education program for Ericsson’s top management at the Graduate School of Business, Columbia University.

Along with her corporate engagement, Gordana Kovačević has also been actively participating in the activities of several reputable institutions in Croatia.  Due to excellent academic results achieved in cooperation with the leading representatives of the academic community, Gordana Kovačević was appointed as member of council of several faculties. In her career, she received numerous awards and recognitions, and for the fourth year in a row, Gordana Kovačević was the most powerful woman in Croatian business. In 2019 she received a special award for the overall contribution to Croatian economy.