Lars Magnus Ericsson, the Founder of Telecommunication Corporation, an Innovator and a Skilled Entrepreneur

Today, 40 percent of the mobile traffic worldwide is connected via Ericsson networks. The belief of L. M. Ericsson, the “Father” of this global telecommunications company, that communication is one of the basic human needs, and that possibilities to communicate should be available to all, turned into our reality. L.M. Ericsson opened a new era of communication. 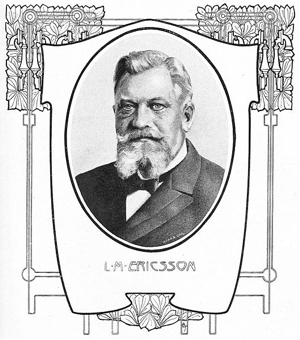 Ericsson Corporation is currently among the leading global providers of telecommunication equipment, services and solutions. However, a way back in 1876 when Lars Magnus Ericsson opened his small workshop, even in his wildest dreams, he could not have foreseen this kind of sequence of events. One can say that the history of Ericsson Corporation is also a history of global telecommunications. When Lars Magnus Ericsson started his business in Stockholm in the second half of the 19 century, he did not think about multimedia interactivity or similar advanced and sophisticated concepts, at all.  He had a modest plan: making and repairing telegraph devices for the key government offices: Swedish Government, Railway and Military. Across the Ocean, in 1876, Alexander Graham Bell invented a device, without which present life is unimaginable– a telephone set. Lars Magnus Ericsson, who was then only a young mechanic, soon made his own telephone set, and telephony, became the main area of his interest and work.

Let’s go back to the beginning of this success story: Lars Magnus Ericsson was born on May 5, 1846 in a rural and pretty undeveloped Sweden, in which an average life expectancy was only 40 years.  Ericsson became one of the key figures, who transformed Sweden to an industrial country with a high living standard. He was the six out of nine children and was born on a small farm near Nordtomt, close to the Norwegian border. His father died when he was 12, and at the age of 14 he started providing for himself: he tried himself out as a miner, worked on a railways construction, and this harsh physical experience made him realize that he needs to pursue further education, especially in mechanics. Thus, at the age of 20, he moved to Stockholm where he was an apprentice with the instrument manufacturer, A.H.Ollera. Ollera was subsidized by the Swedish Government for making and repairing telegraph instruments, and the young Lars Magnus got himself interested in that. Therefore, he was spending his evenings studying mathematics, technology of materials, technical drawing and learning English and German. 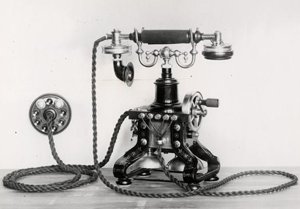 At the recommendation of his boss, Lars Magnus Ericsson was granted a State scholarship that enabled him to travel and study abroad. From 1872 until 1875 he lived in industrially developed European countries such as Germany and Switzerland, studying electrical engineering. Soon after his return to Sweden, in 1876, Ericsson left Oller Company and with his colleague, Carl Johan Andersson, opened an engineering workshop in Drotitninggatan, in the center of Stockholm. The company was named LM Ericsson & Co, and was specialized in making and repairing of telegraph sets. However, as A.G. Bell patented his telephone set in the United States, but failed to do it in Sweden and Germany, Ericsson bought and tried out this peculiar device. But, he was not the only one. Soon, people started soliciting him to repair their telephones. Thus, he became aware of the opportunities that lie in there, and soon his telephone sets were better and a cheaper versions of the original. He sold his first telephone in 1878. In the same year, he married Hilda Simonsson, who became his active partner in the Company. 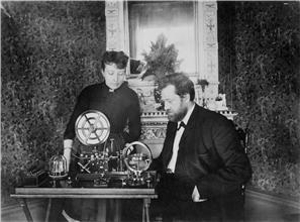 The Rapid Growth of the Company

The rapid growth of the Company followed: In 1876 the workshop was moved to  Jacobsberggatan,  and afterwards it was moved each year to larger premises, until in 1883, when it was finally moved to Thulegatan, at the outskirts of Stockholm, where it remained until  1939. In 1896, Ericsson decided to turn the Company into a Joint Stock Company, named Aktiebolaget LM Ericsson&Co, and held 900 out of 1000 stocks for himself, giving away the rest of the stocks to his employees. The Company was formally registered on April 27, 1896, and Ericsson found himself at the position of the Company’s President and CEO. Untill1900, only 22 years after selling his first telephone, Ericsson became the number one supplier in the international market. In the same year, Ericsson decided to withdraw himself from his leading position and the next year he retired from the position of the Chairman of the Board, although he was still in force, and was only 55 years old. Although he still had a lot to give to telecommunications, he concluded that he could no longer control all the details in the way he used to, and therefore made a decision to hand over the management process to the others, and retired.

We do not know a lot about Lars Magnus Ericsson. Allegedly, he was tall and strong, had a white beard and he would be noticeable wherever he appeared.  He had a strong will and was determined. In some situations, he seemed to be arrogant, but in fact, he was said to be mild and modest. He was calm, and would never lose his temper; he preferred irony and light sarcasm. His intelligence, ability and capacity for hard work were never called into question, and he was obviously a good manager, as well. Although he was not reputed to be prone to risks, he was obviously prepared to be radical in technology and business, where he used all possible innovations.